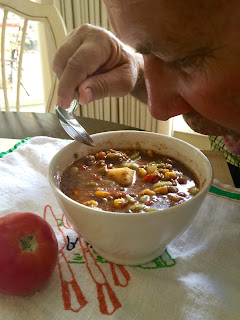 I was in a hurry the other day....like most days...but I still really wanted to eat something homemade.  I also wanted to cook something that my little 3 year old grandson might eat.  So, after wracking my brain, I finally decided to make a soup.

I have never made this soup before.  I actually used Pioneer Woman's Hamburger Soup recipe as a guide because I figured it would be the best.  But, I changed it, of course.  I wanted more depth of flavor so I kept adding garlic, spices, onions, worcestershire, etc.  I did not add anything spicy because of my grandson.  It was a hit.  My husband said it was the best soup he had ever eaten...so he got his picture in the post (don't tell him though, he was just being goofy in this pic).  My grandson didn't eat any of it. Ugh!  But he is 3 so ya just never know! Haha!  He actually ate a peanut butter and jelly sandwich which is always a good choice and if I had a picture of him eating that, I would've posted it because he is just so precious!

This soup was done from start to finish in 45 minutes.  The potatoes take the longest so the smaller they are, the quicker the soup cooks.  Pioneer Woman's recipe called for carrots, but no baby lima beans or corn.  I didn't have any carrots but I had the other ingredients so that is what I used.  This soup is versatile and you can switch out veggies for the ones you like.  You could serve this with rice or tortillas.  And it is so full of flavor!  It is a recipe that I will be making over and over again!

Place the meat in a large Dutch Oven and add green onions, onions, garlic, celery and a lot of garlic powder.  Also, add salt and pepper at this time to the meat.  Cook until the meat in done and then drain the grease.

Return to the stove and add the rest of the ingredients.  Return to a boil, then reduce heat and cook until the potatoes are tender.  Salt to taste.  Top with shredded cheese and/or chopped green onions, if desired.  Serve with cornbread or garlic bread.

Heya! I was wondering if you could let me know what the suspected number of servings to get from this, if you don't mind.Thanks.

I would say this serves 8 adults easily.