BRAISED KALE WITH BACON AND ONIONS 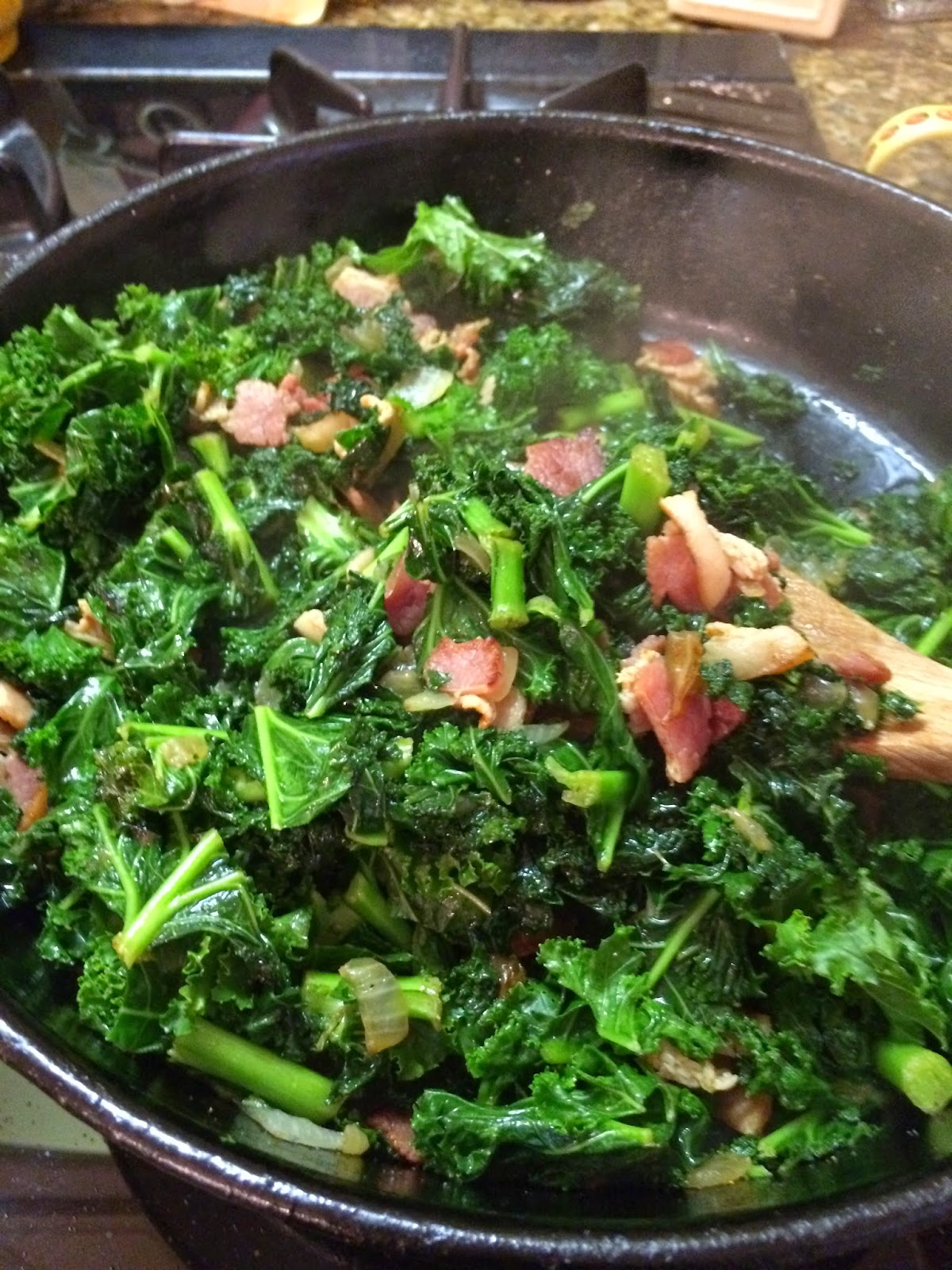 I didn't grown up eating Kale.  In fact, I only knew of kale as those pretty little decorative plants that you grew in a flower bed.  However, over the past few years, and maybe because of the popularity of Food Network, I hear of kale more and more.  It actually could be because of the health benefits of kale too, that so many people are choosing to add kale to their diet.

Last night was the first time I had ever cooked kale by itself...not in soup or as an added ingredient in dishes.  I must say I was pleasantly surprised at the flavor, the color, and the texture when cooked.  My husband and I both thought it reminded us of collard greens both in the way it looked and also in the flavor. I like most of my vegetables to be a little crunchy....not mushy.  I don't want them to just dissolve in my mouth.  When cooking kale, it reminded me of spinach because it shrinks as you cook it.  So, you may start out with what looks like a lot of leaves but they wilt quickly.

This dish was simple and I have added it to my favorite veggie list! I think it would really be good to add a little kick like crushed red pepper to the dish, but my 18 month old grandson was eating with us so that was a big NO-NO.  A little chow-chow or some pepper relish would be good added to it, as well....at least I think so!

This recipe came out of a Lodge Cast Iron cookbook.  I absolutely love cast iron but I only have one good skillet which is what I used for this dish.  Now that I think about it, this skillet came from my mother-in-law, Joy. You know, I think today I am going to change that and order some pieces.  I like to watch The Pioneer Woman and she has an entire collection.  Oh wow, boy have I diverted from what I was talking about.  Annnnnyway.....if you have a cast iron skillet, use it for this recipe.  If not, just use any skillet.  I don't really like non-stick pans.  I have one but I only use it for cooking eggs or pancakes. I just don't think they get things browned-up as well.  But if that is what you have...by all means use it....it will definitely work!

The good thing about this dish is that it will go with just about anything....especially cornbread!  It doesn't get much more Southern than that! 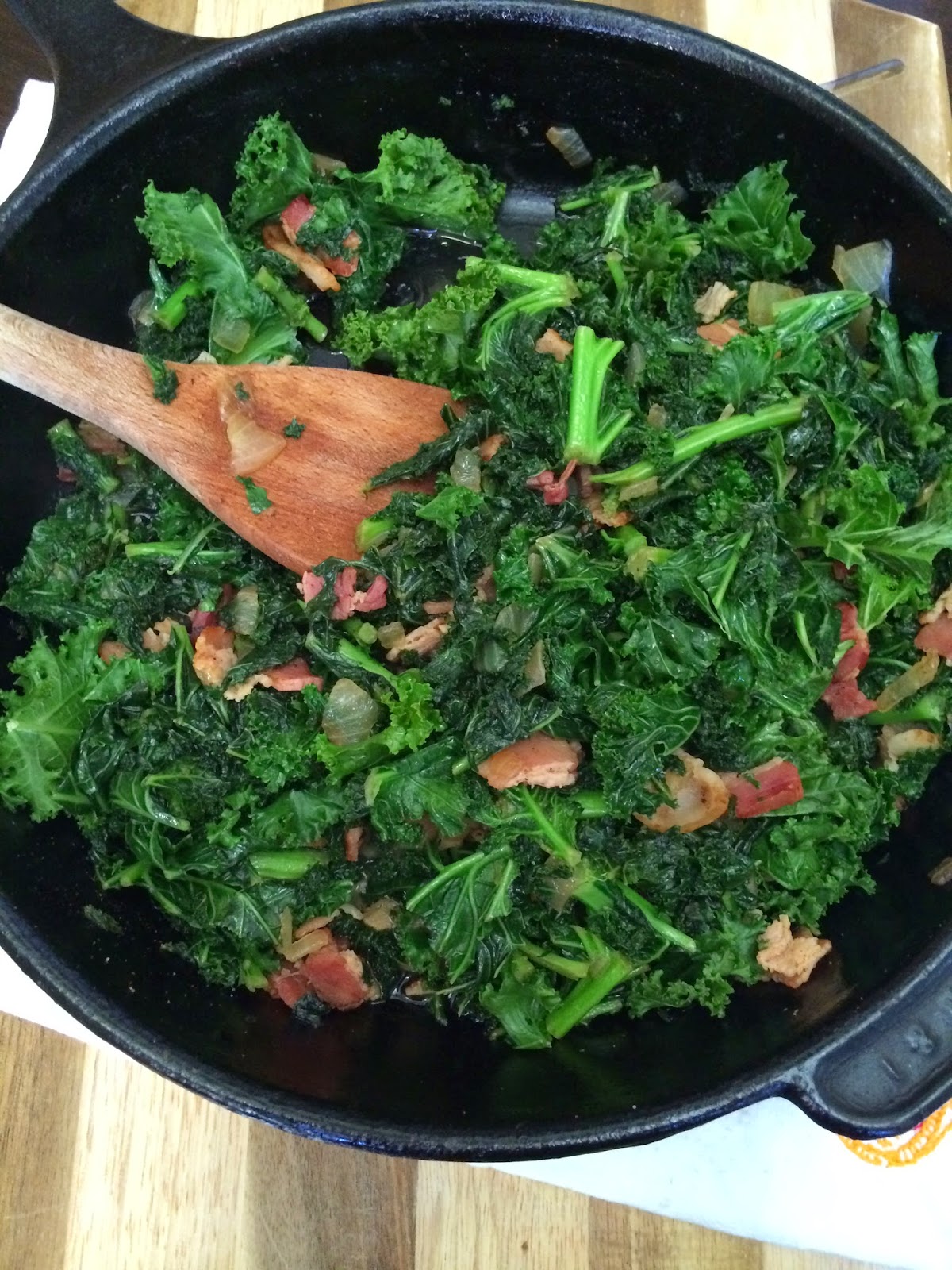 BRAISED KALE WITH BACON AND ONIONS

Cook the bacon in a 10 inch cast iron skillet or dutch oven over medium-high heat, stirring frequently, until browned and fat is rendered, about 5-10 minutes. 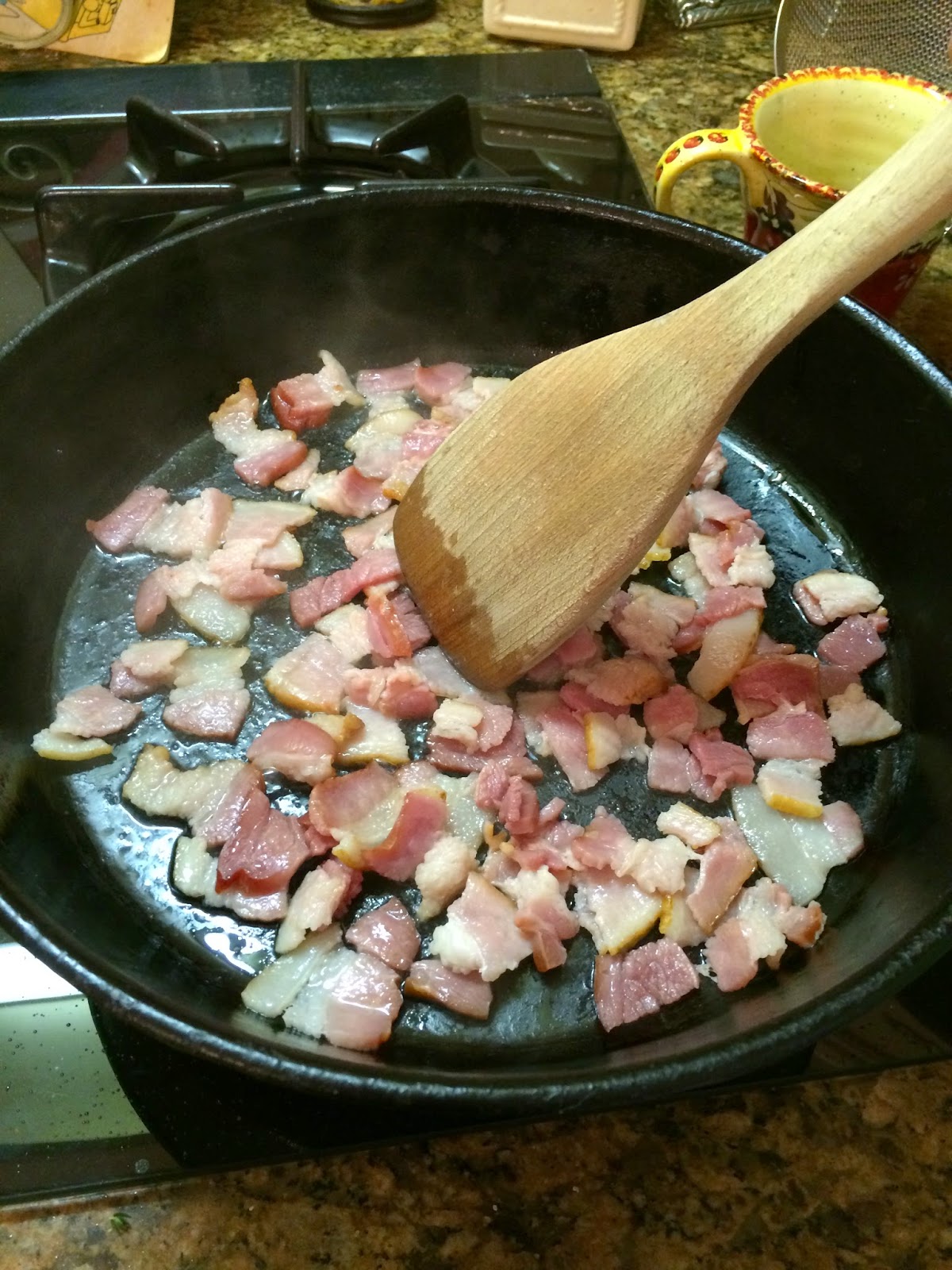 Add the onion, reduce the heat to medium, and cook, stirring occasionally, until golden, about 5 minutes. 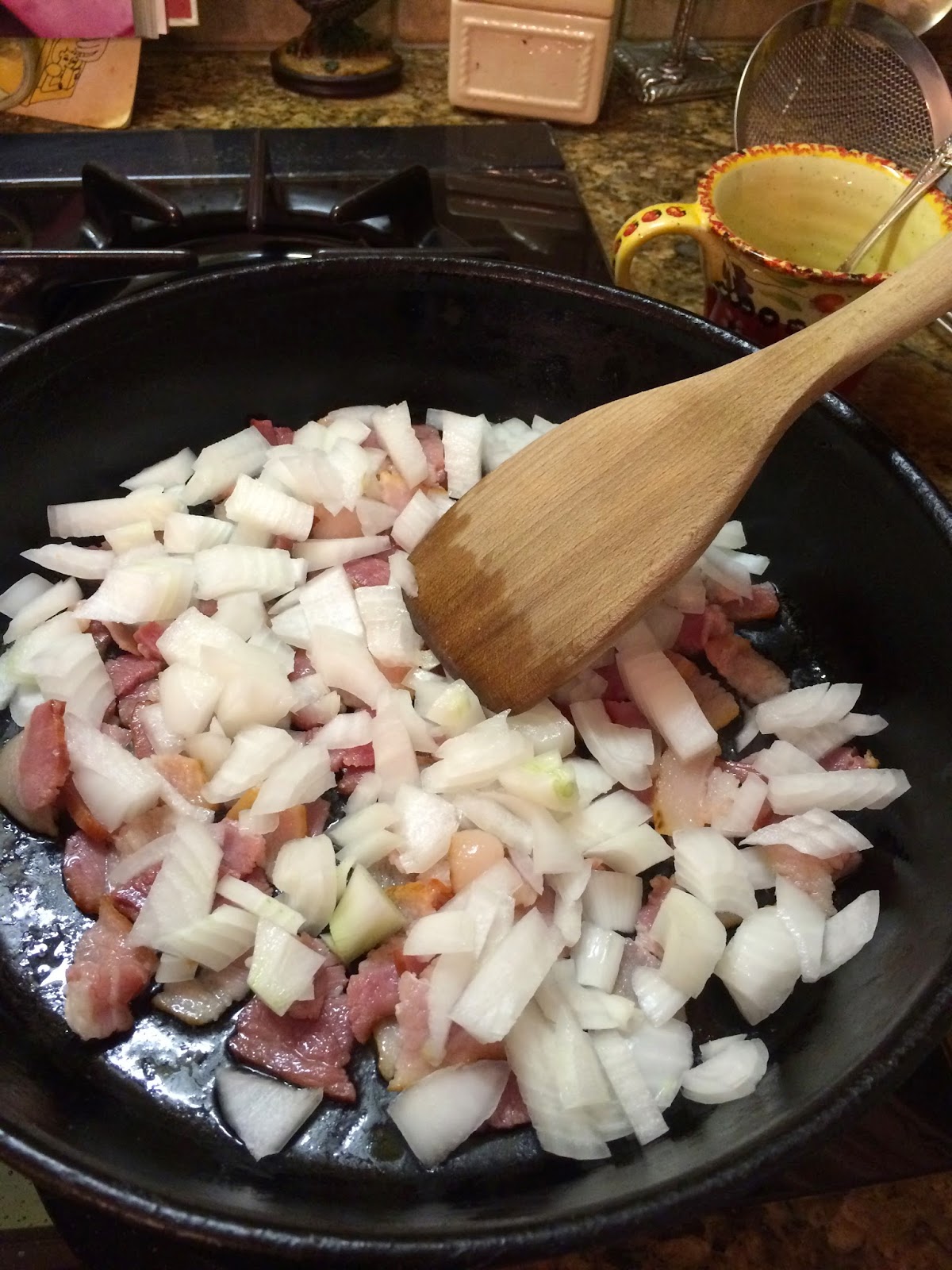 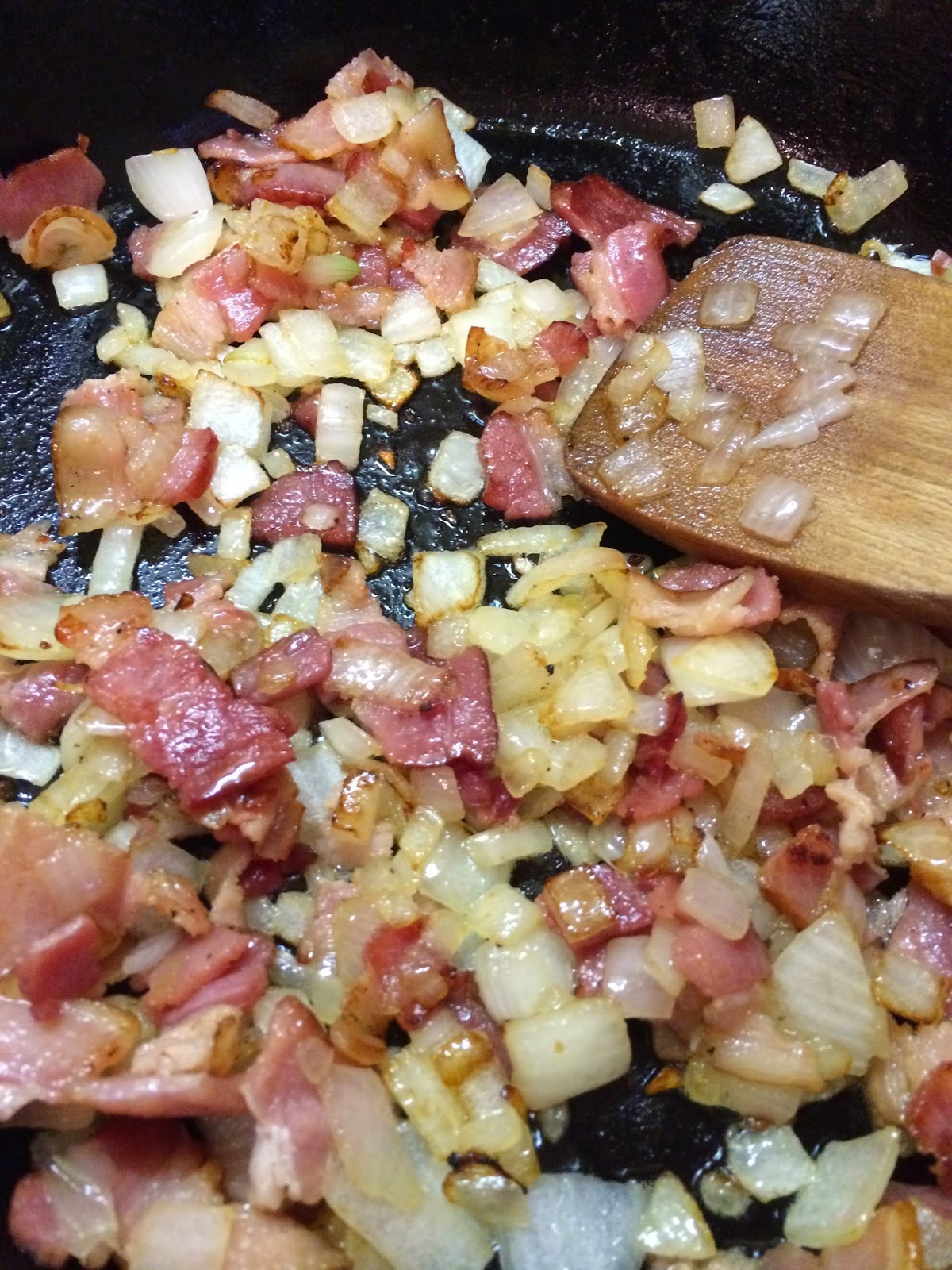 Raise the heat to medium-high, and add about 1/4 cup of chicken broth and and handful of kale and toss until wilted. 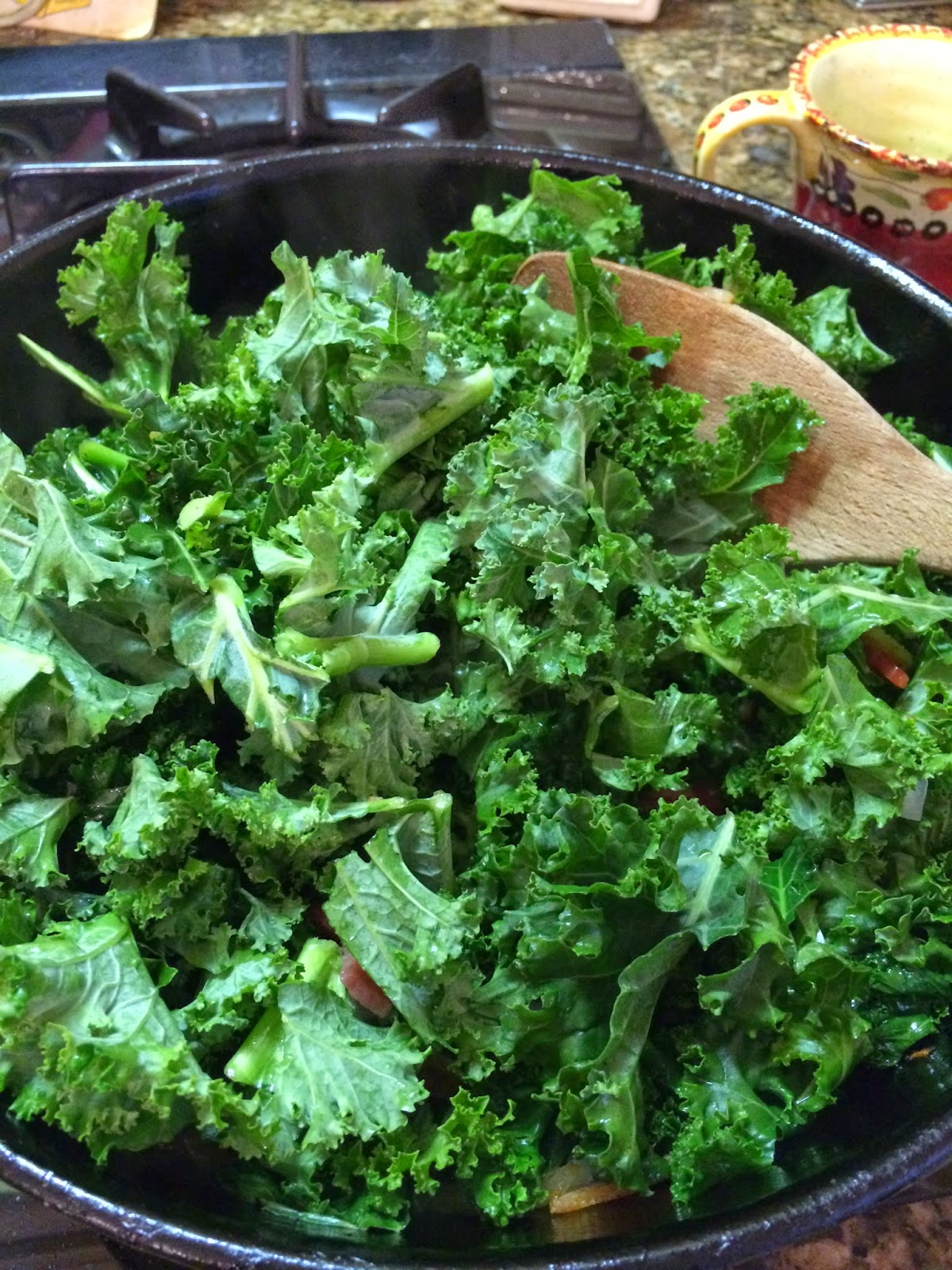 Continue adding chicken broth, a little at a time, to keep a good steam going, and add more kale.  Stir constantly and allowing each addition to wilt before adding more. 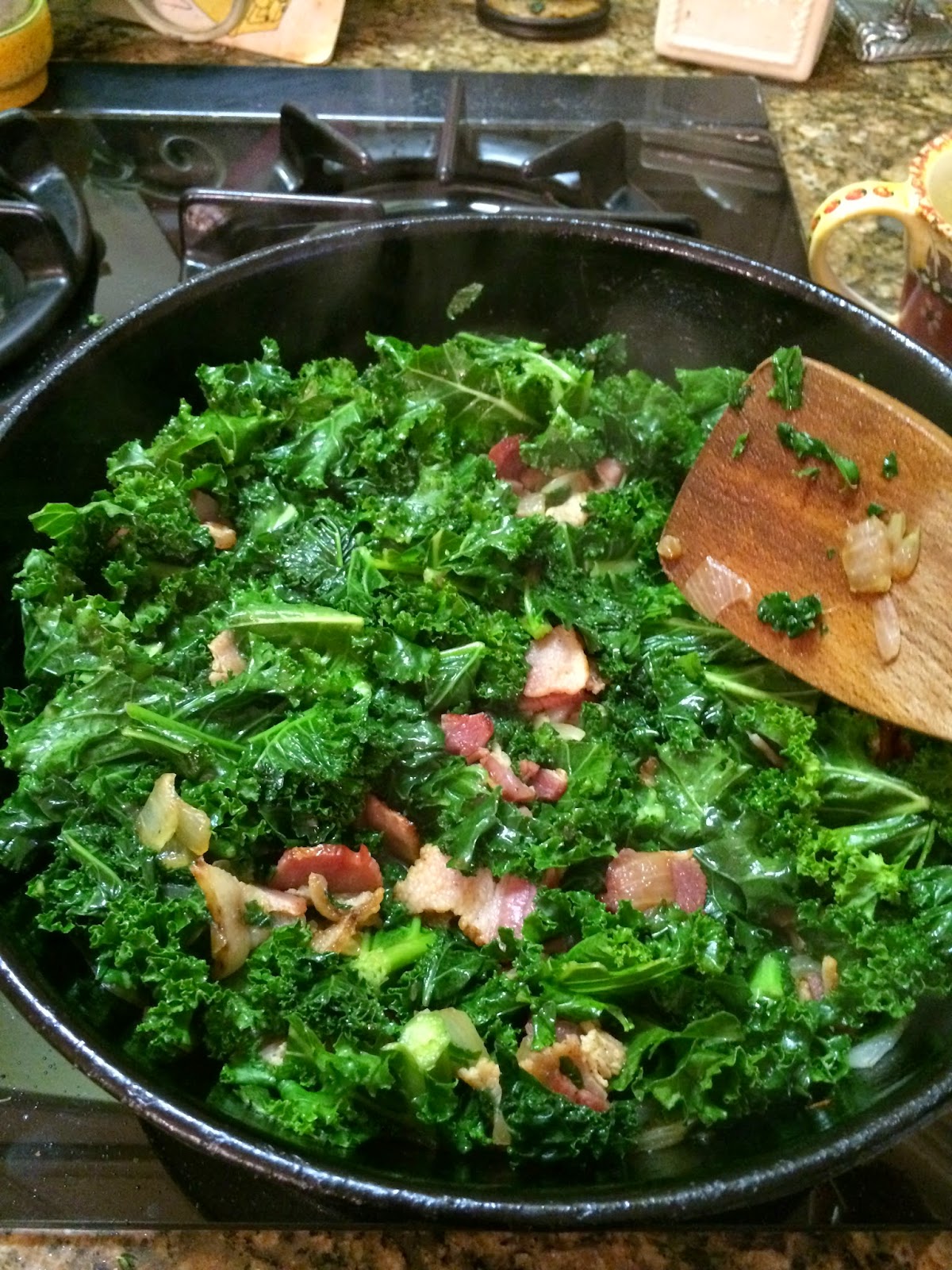 When all of the kale has been added and has been wilted down, add salt and pepper to taste.

It should be tender but still retain its lovely green color.


Posted by Little Magnolia Kitchen at 11:35 AM 2 comments: 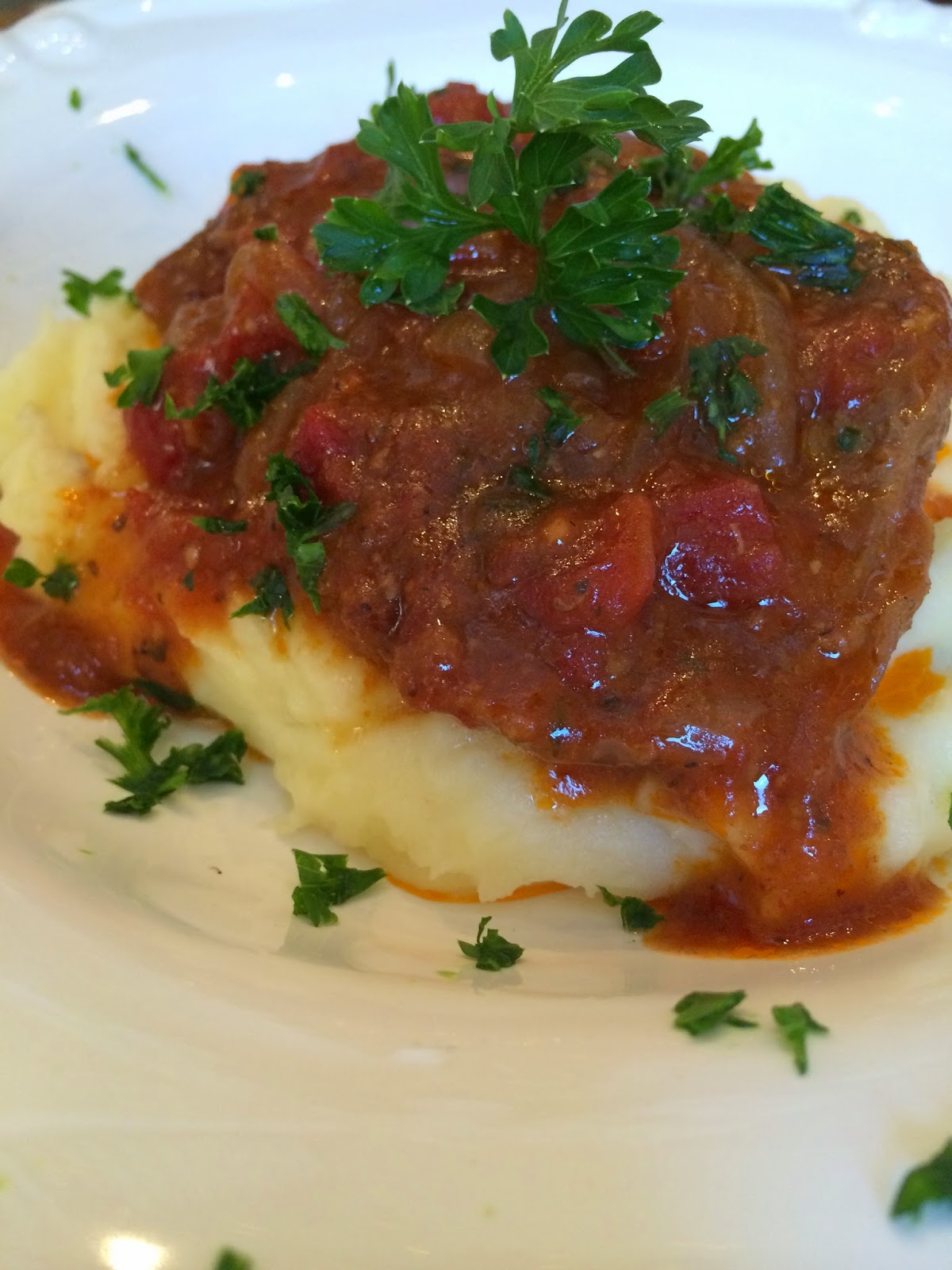 Well, this dish has received 5 Stars at my house!  My daughter declared this as her  new favorite dish and I think I am in agreement!

I was looking through an old magazine called "The Best of America's Test Kitchen" and found this recipe.  I used to make Oven Swiss Steak but I haven't made it in years....because I can't find my recipe! Ugh!  But I am glad now that I couldn't find it because this one is better!!  It literally cuts with a fork...no need for a knife.  It has a deep, rich flavor and it is perfect served over mashed potatoes.

The recipe called for a Top Blade Steak but I couldn't find it at either of my local grocery stores so I decided I would experiment with 2 different cuts of meat.  The first was  Boneless Heavy Beef Chuck Tender Steaks and the second was Thin Sliced Sirloin Steaks sliced in half.  I forgot to look at how much they weighed so I ended up with about 3 pounds of steak or 12 small pieces of steak.  This recipe calls for 3-1/2 - 4 lbs of meat so, I could have added 2 more steaks cut in half for a total of 16 pieces of meat.  I would say this recipe serves 6 to 8 people easily.  Oh...and I would use only the Sirloin Steaks next time.  They cooked up perfectly and had very little fat.

I decided to keep it simple tonight so I just made mashed potatoes and sauteed kale (I will blog that tomorrow...super easy).  It was just right.  I would have loved to have rolls, garlic toast, or some kind of bread but I am trying to limit my gluten right now sooooo no bread....Booooo!!  I love bread!!

I was so tempted to change up this recipe because that's just what I do but I decided, no matter what, I was going to follow the recipe perfectly.  I did mess up and I added the sun dried tomatoes too early but it didn't seem to make a difference.  Try it and let me know what you think! 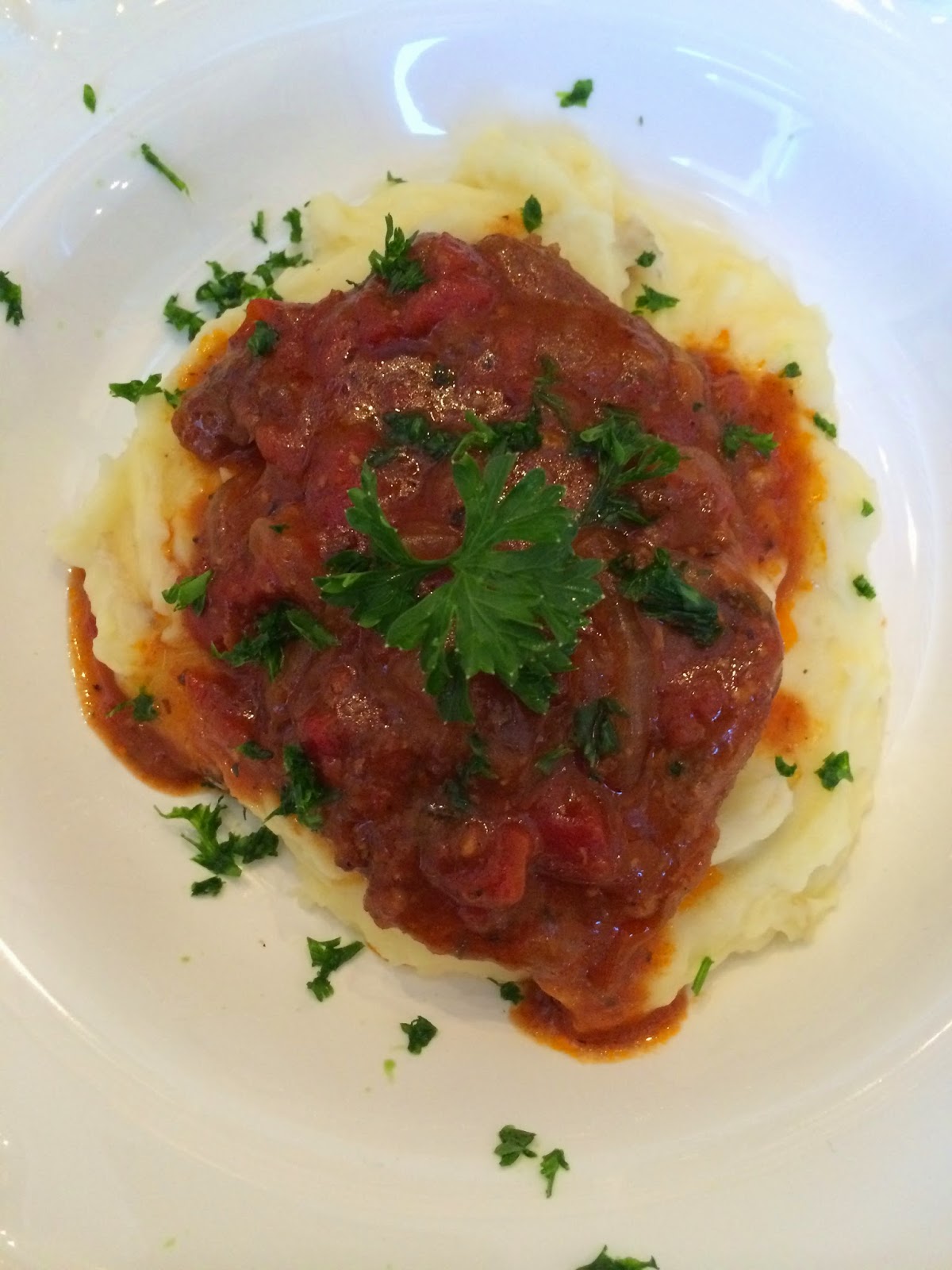 Pat steaks dry with a paper towel and season with garlic salt and pepper.

Heat 1 tablespoon of oil in a large Dutch oven over medium-high heat.  Brown steaks in groups, making sure not to crowd the steaks, about 3 minutes per side (my stove took a little longer). 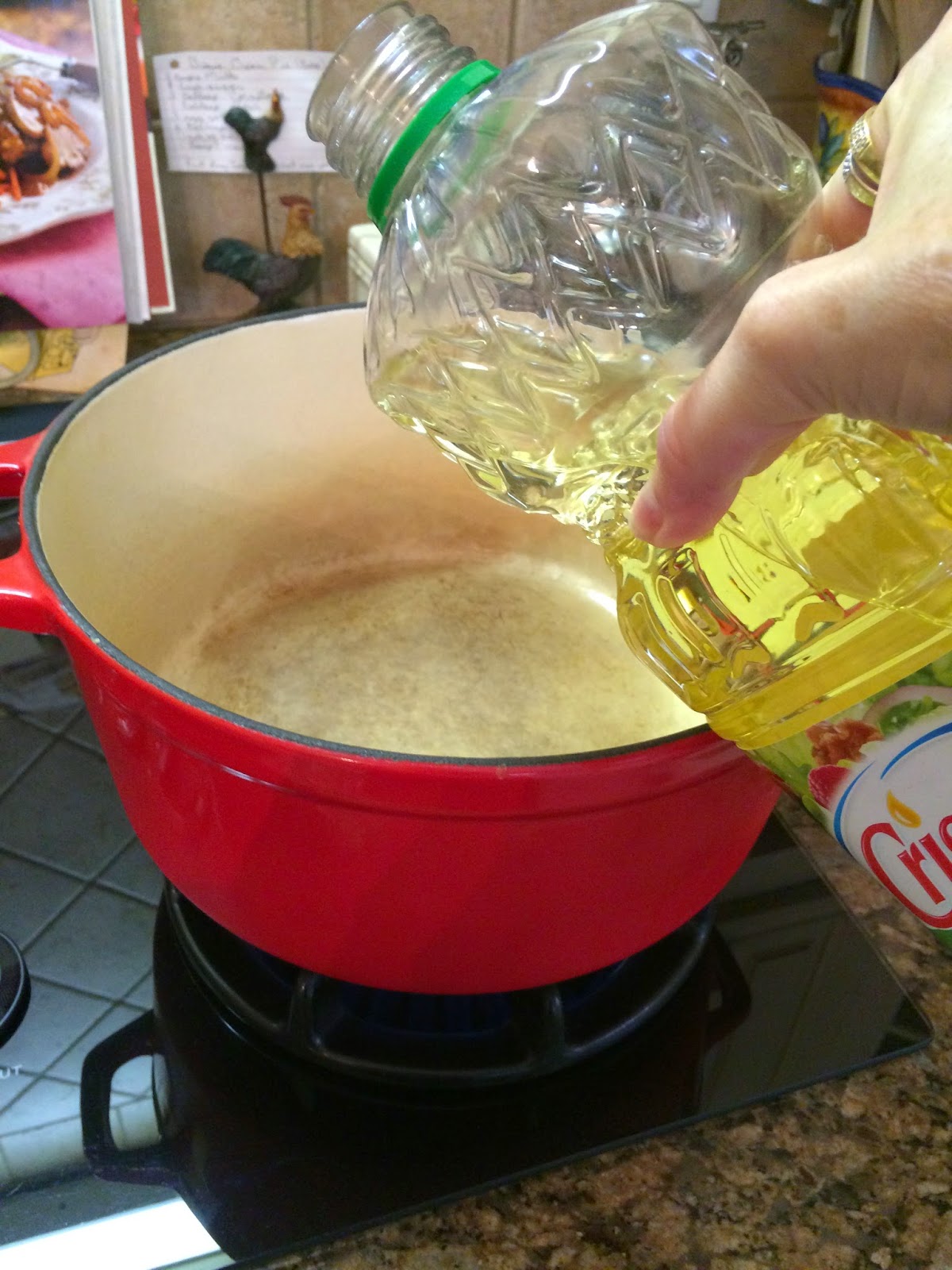 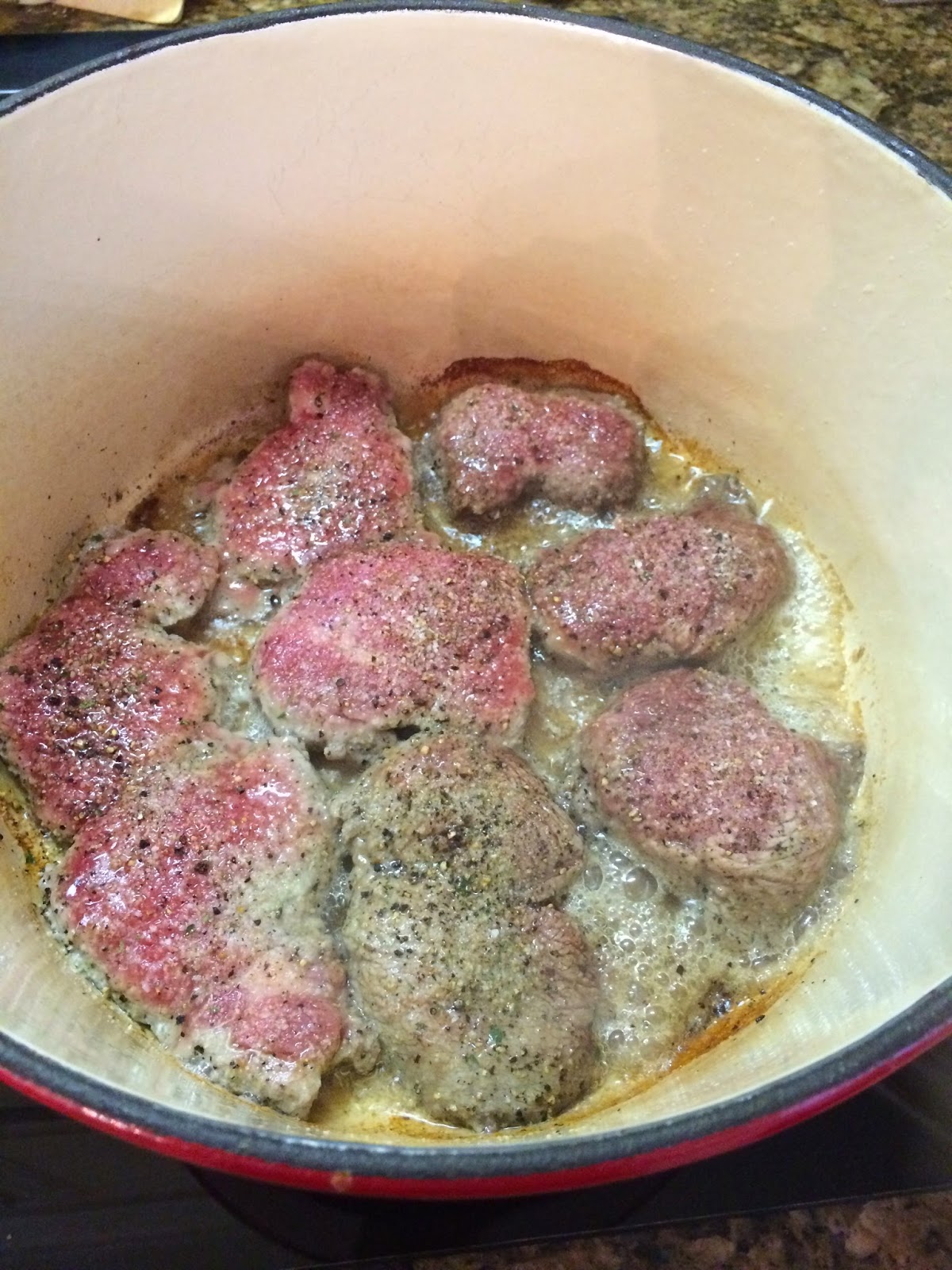 Transfer the steaks to a plate and repeat with the remaining steaks and oil.


Add the onion to the empty pot and cook them until softened, about 5 minutes.  You may need to add a little oil if there is not enough to saute the onions. 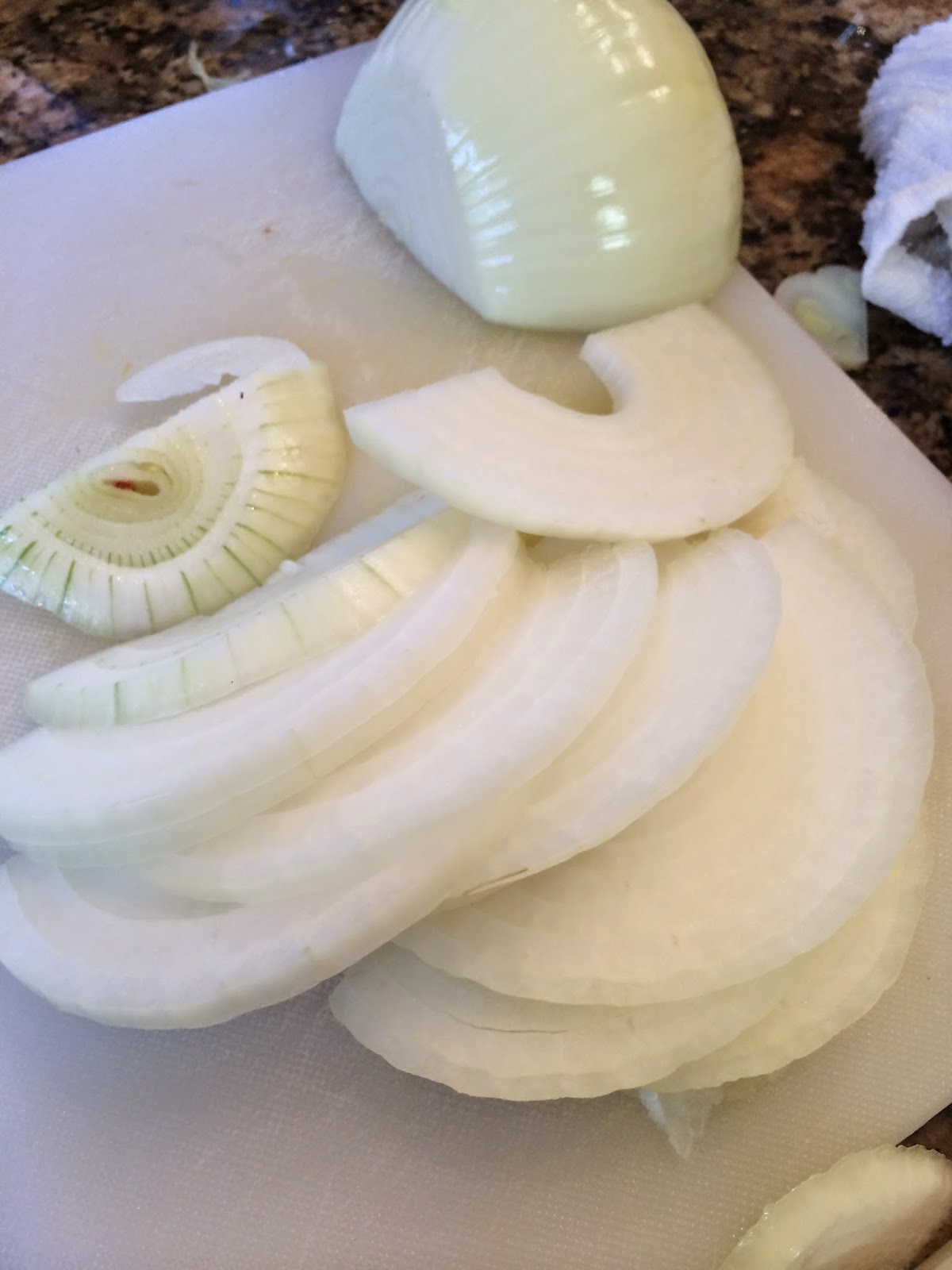 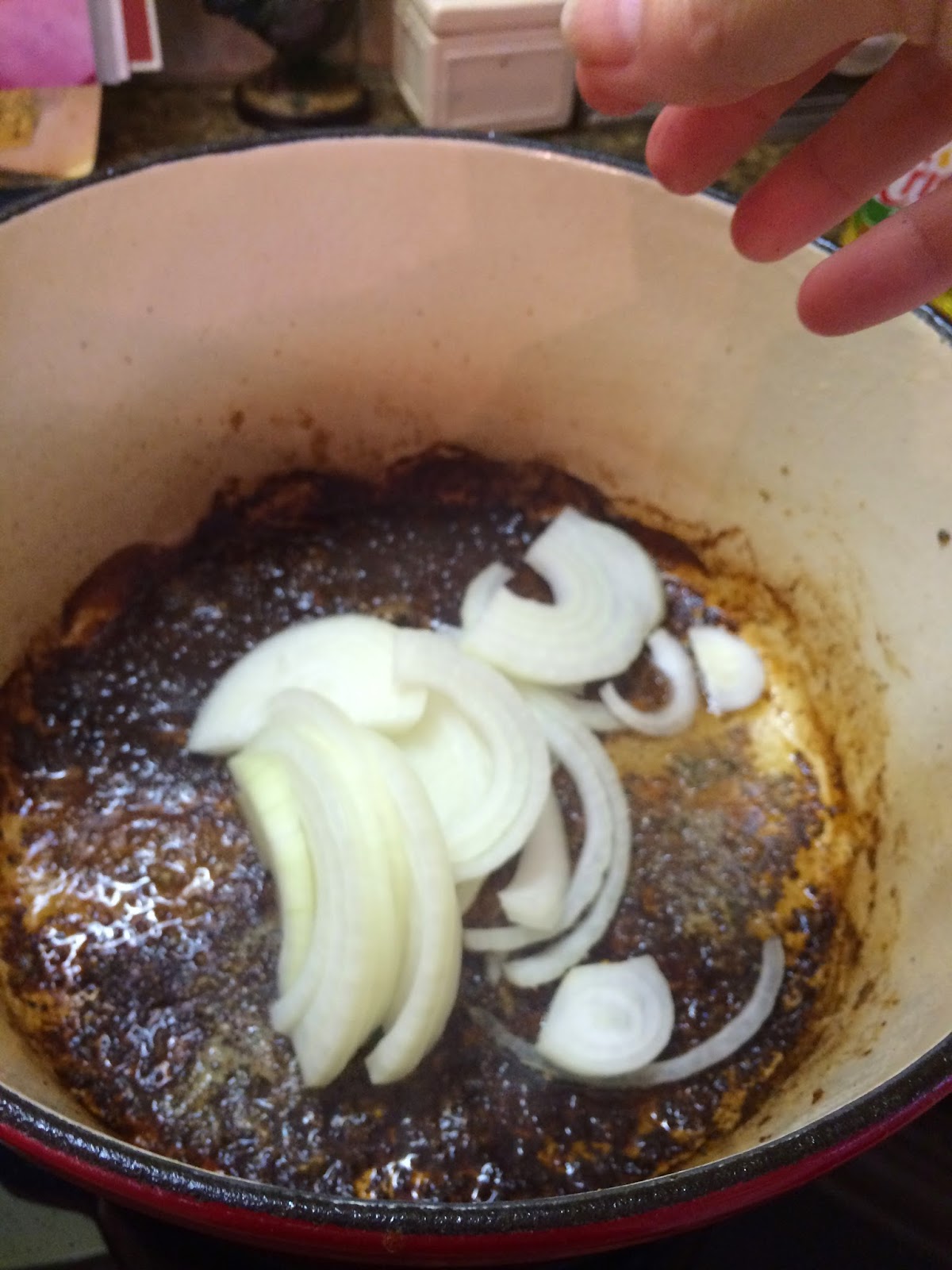 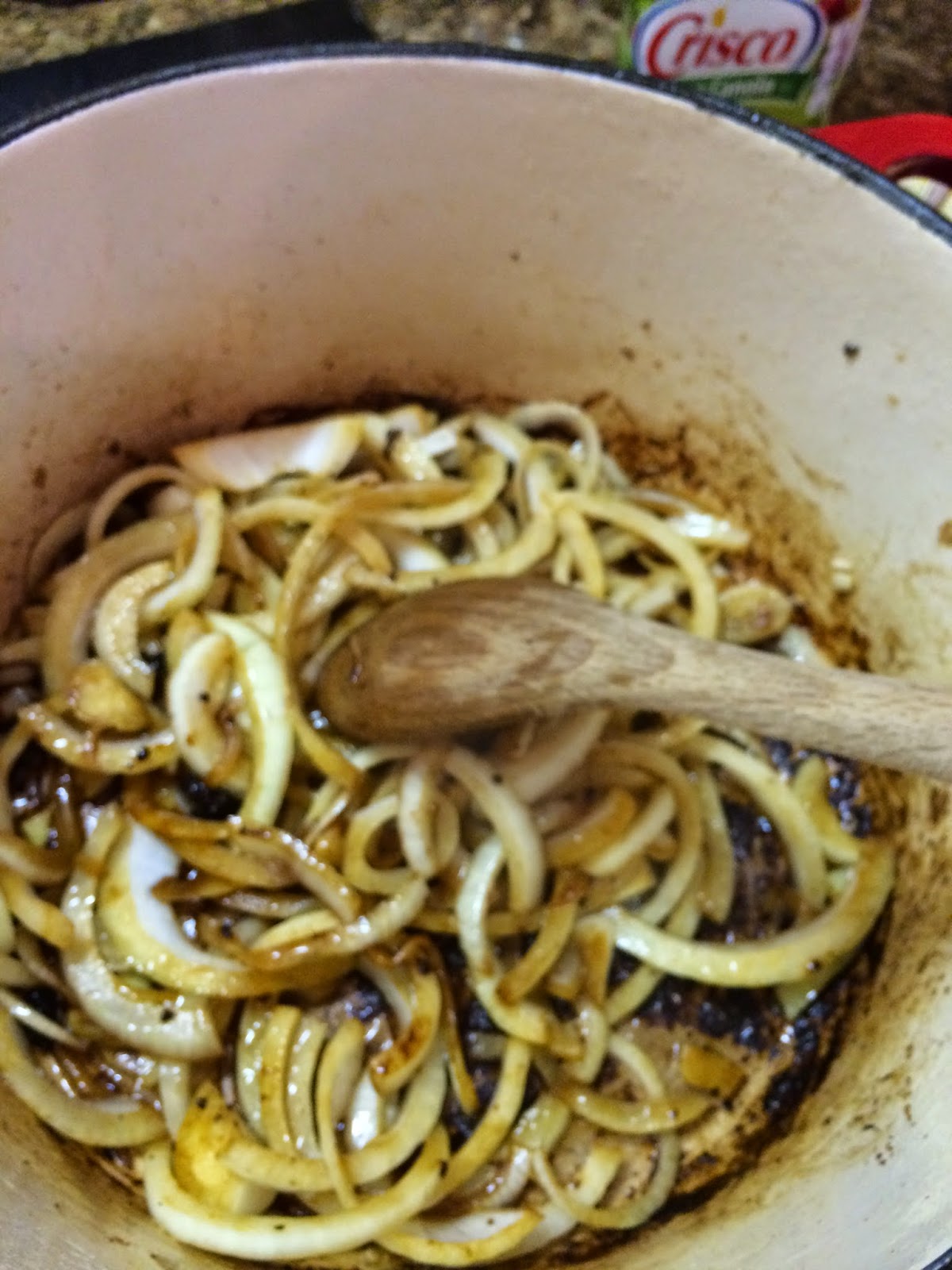 Add the tomato paste, flour, garlic and thyme and cook until fragrant, about 1 minute. 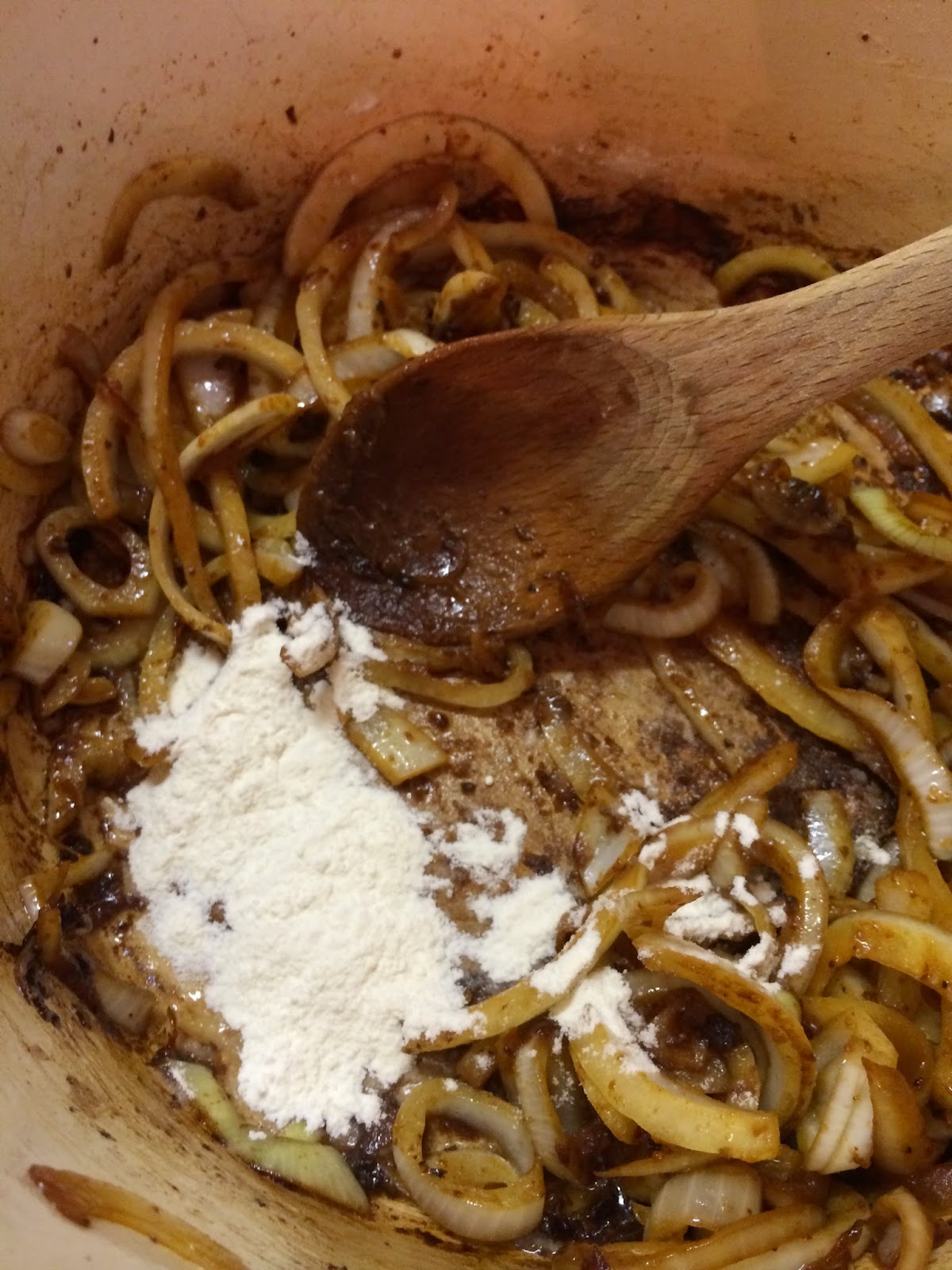 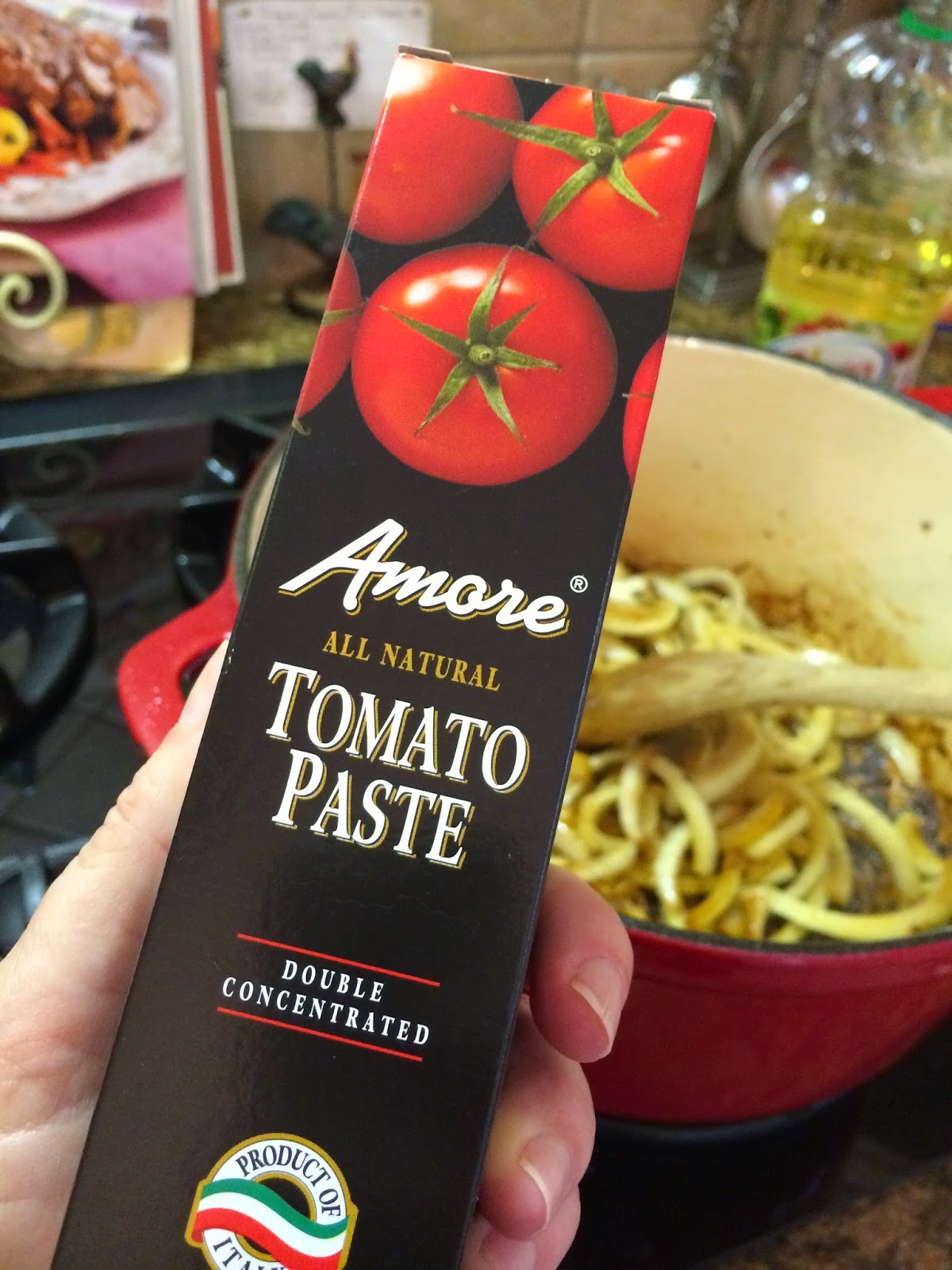 Stir in the diced tomatoes and the broth and bring to a boil. 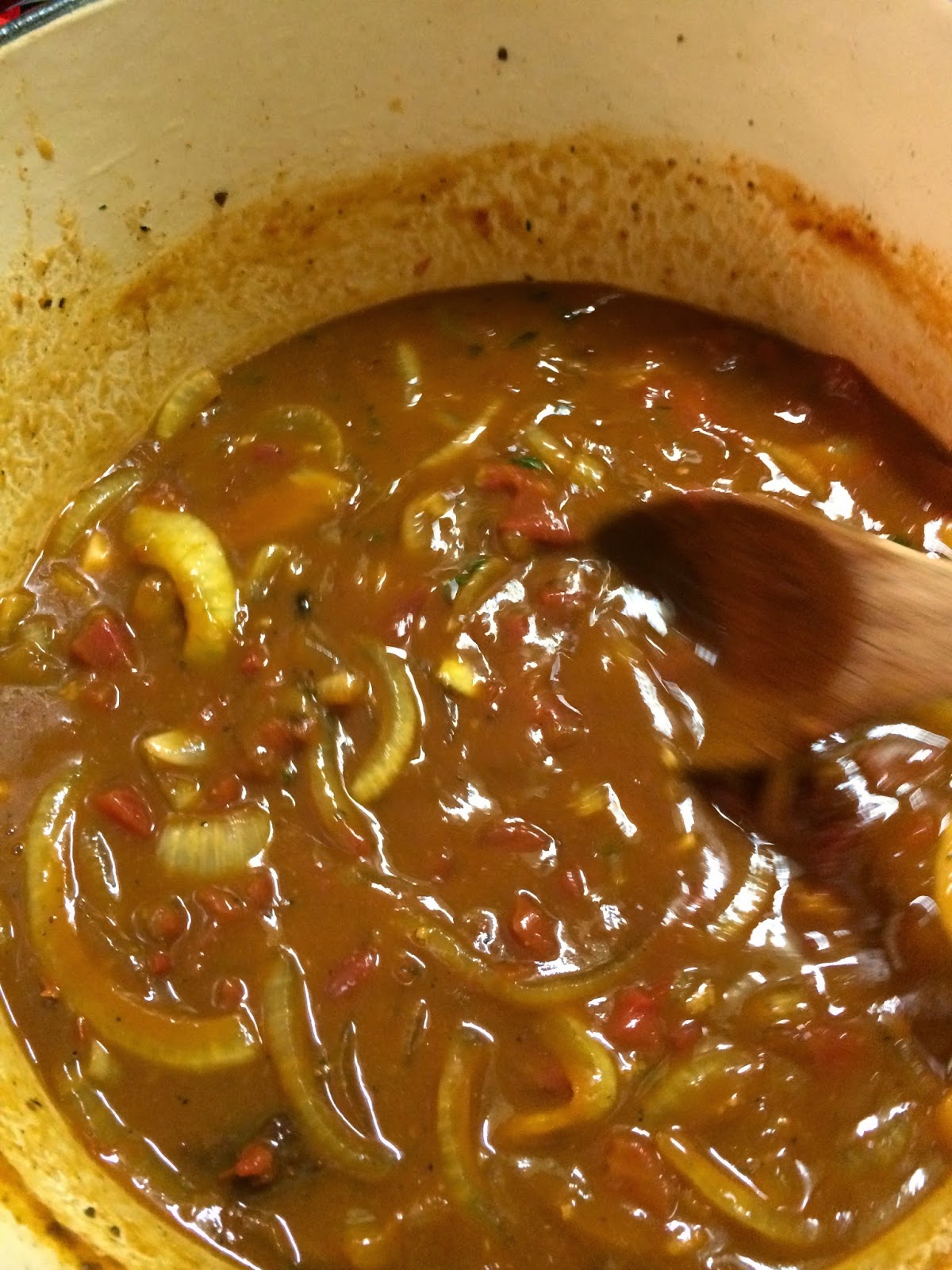 Return the steaks and any accumulated juice to the pot. 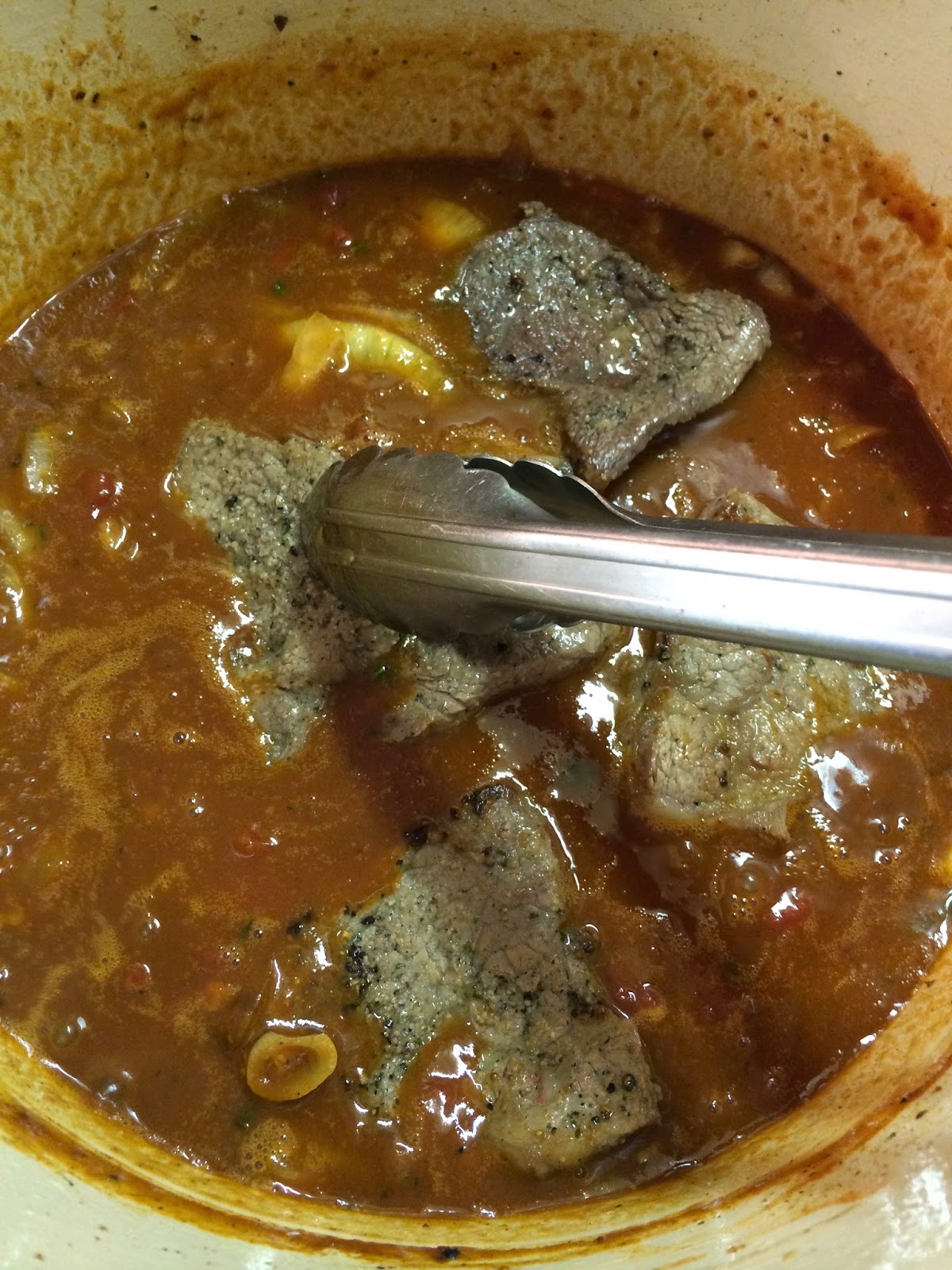 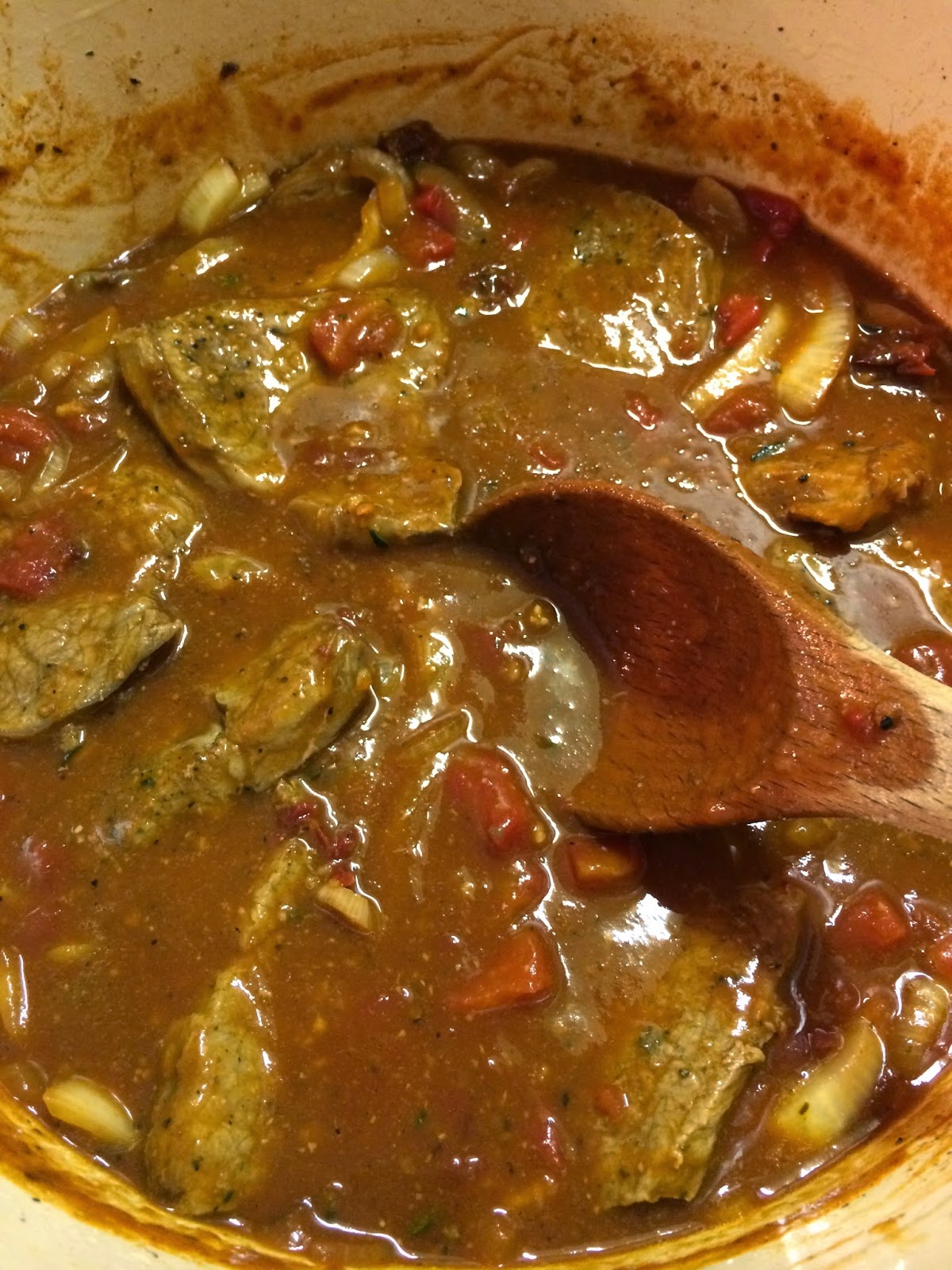 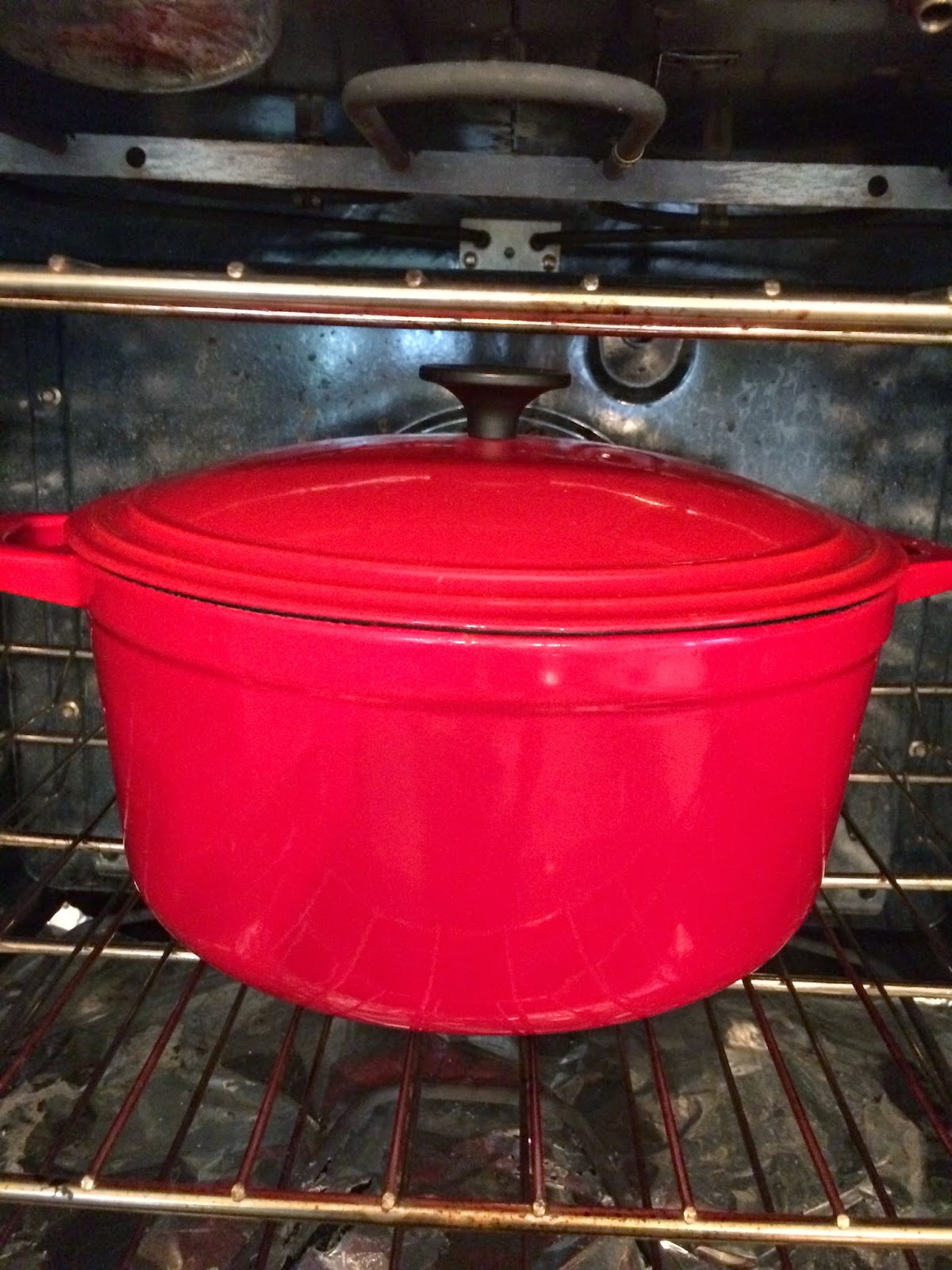 Transfer steaks to a plate and tent with foil.  Let rest for 5 minutes.  Skim fat from the sauce. Stir in the sun-dried tomatoes. Season with salt and pepper.  Pour the sauce over the steaks and sprinkle with parsley. 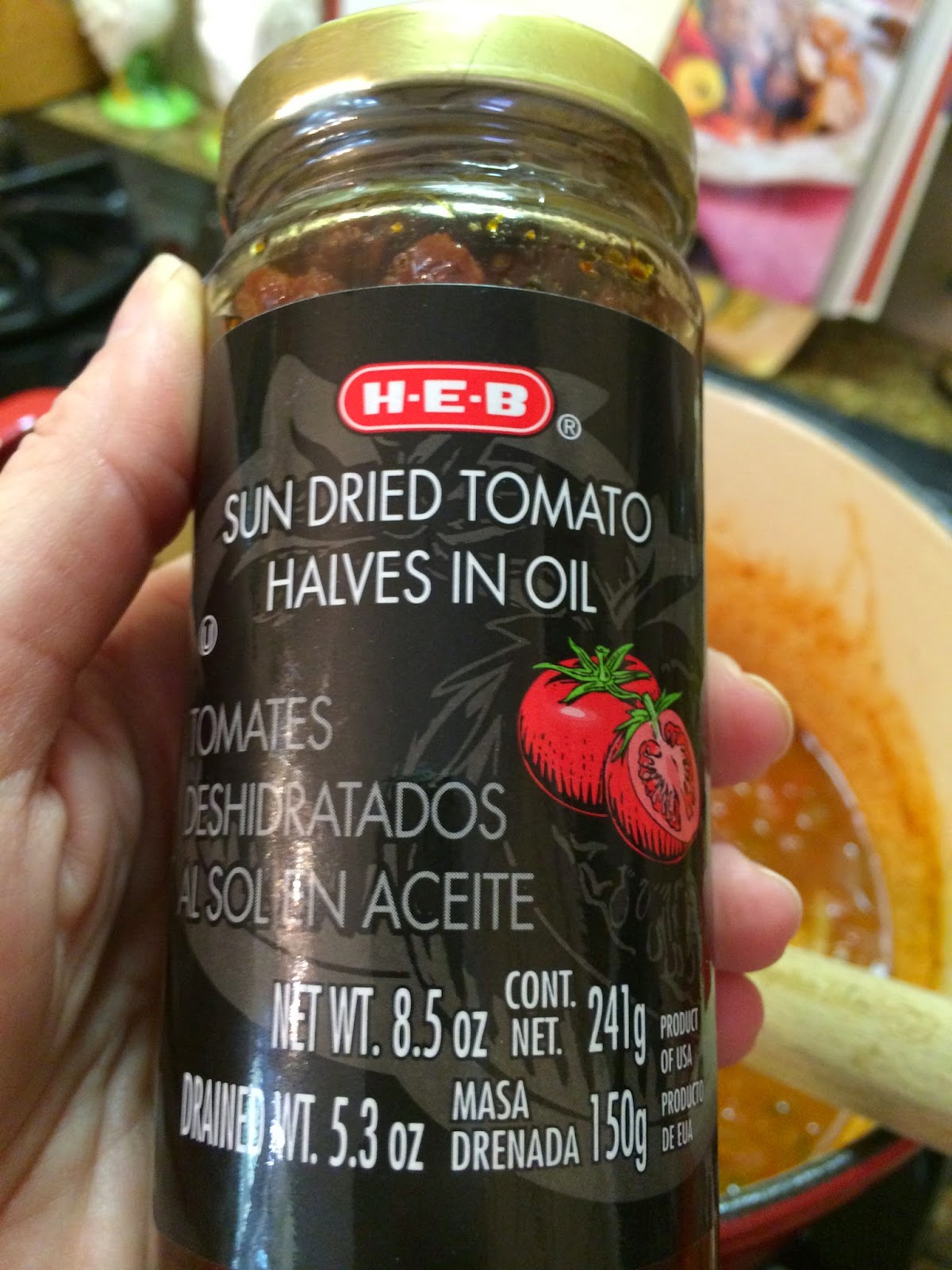 Serve over or with mashed potatoes.

Posted by Little Magnolia Kitchen at 8:25 PM No comments: